with a little bit of effort you can turn poor typography into ok typography in your body copy. unfortunately, InDesign doesn’t really allow for great typography — but that’s something we’ll touch on in a moment. this post is about automatic kerning, justification and hyphenation.

the first thing to check when you’re working with a particular font is what result you get with each of the automatic kerning options — metrics and optical. which one of those is best for a particular font depends on how good the type designers were at doing their job.

when you choose optical you are asking InDesign to override the typographer’s kerning tables and space the characters more or less visually based on the shapes of the characters.

here are a couple of screen grabs showing the same portion of text using the two different automatic kerning methods : 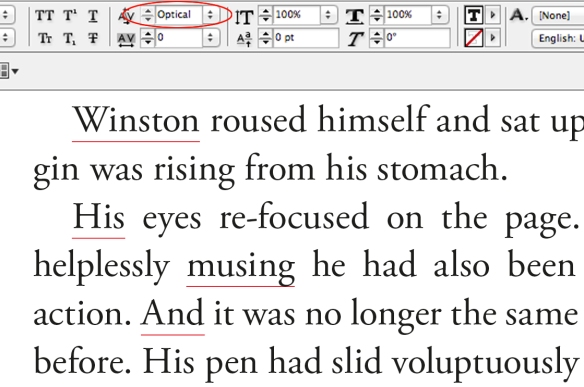 as you can see, neither of these methods is perfect. ‘his’ and ‘and’ are undoubtedly better using metrics kerning, but ‘winston’ and ‘musing’ are better when using optical kerning — the metrics don’t come up to scratch. and this for a font called Adobe Garamond Pro — you would think we should expect better from the metrics.

and here’s why InDesign doesn’t allow for great typography and why, in at least this one aspect, Quark shits all over InDesign. with Quark you have the option to correct dodgy metrics by editing the kerning tables. so, with Quark we could get in there and fix that diabolical ‘mu’ combination in the kerning table and then it would be corrected for every instance throughout the entire document. InDesign allows no such finessing — we are stuck with the shitty kern-pairs that come with the font or we take our chances with optical kerning.

so, when working with a new font, always check both automatic kerning methods to see which will give you the least disappointing results.

ok, now on to justification. the default justification settings that come with InDesign are simply insane and lead to this kind of abomination :

this is because the default justification settings look something like this :

those numbers are invariably going to lead to shit results. all the adjustments to a line of text happen between the words — none between the individual characters — and those adjustments range from 133% word spacing (big gaps) down to 80% (words running together).

settings which make just a little more sense look something like this :

… and will lead to better results — not perfect, but better :

right, last we have hyphenation and, again, the defaults are ludicrous :

just the fact that automatic hyphenation is turned on by default is silly enough — because InDesign is not that great at deciding where a hyphen should appear within a word. but the rest of those settings will, AGAIN, invariably lead to shit results — like this :

four hyphens in the first seven lines and the very first word on the page is the second half of a word from the previous page — just atrocious.

the improvement to the type is simply indisputable :

but wait, there’s more …
once you come up with a bunch of settings which suit your sensibilities you can make them your very own defaults — just the same as you can change so many of InDesign’s default settings. just make sure you have no documents open then adjust the justification and hyphenation settings through the paragraph panel (under the type menu) : 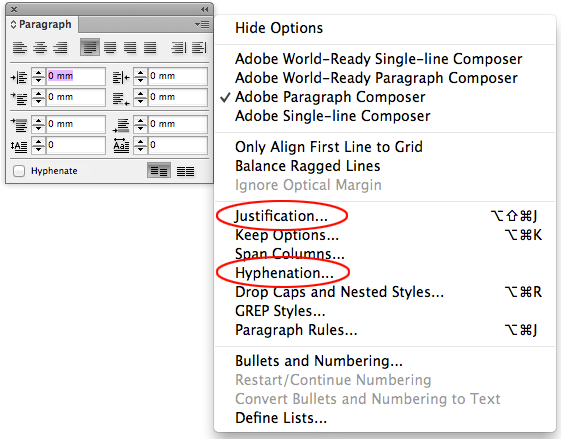 those will be your new defaults for every new document from now on.