sometimes things go awry with InDesign and it behaves abominably. sometimes things go even more awry and you can no longer open the application at all. these are the times to trash your preferences. but sometimes even this doesn’t work — and that’s what we’re going to cover in this post.

but first — trashing preferences. the best way to do this is to manually remove two files (if it’s running, quit InDesign to do this). both of these can be found in the user ‘Library’ which is, in recent versions of OSX, a hidden folder which does not normally show up in the Finder’s Go menu. but if you click Go and then hold down the option key — you’ll see Library get added to the list : 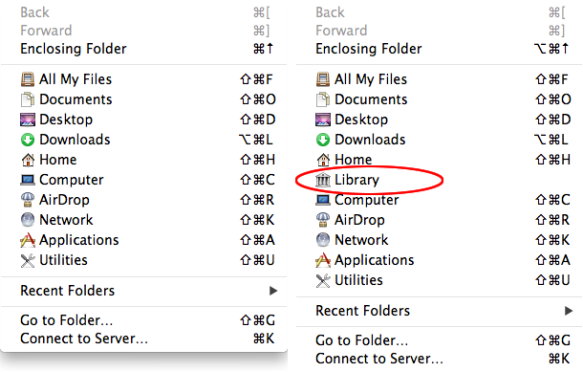 unfortunately, deleting those two files will also delete handy things like print and document presets and whatnot (luckily, things like workspaces, customised keyboard shortcuts, and PDF presets are not lost) BUT it will fix InDesign in the overwhelming majority of cases.

sometimes however this DOES NOT work and InDesign will continue to crash when attempting to start up. this may be caused by some recalcitrant recovery data. so the next thing to try is deleting this folder — also in the caches folder (again, after making a handy backup copy somewhere) :
> Caches > Adobe InDesign > [version number] > [language] > InDesign Recovery >

but once in a purple-polka-dotted moon you may find that EVEN THIS DOES NOT WORK. then it’s time to get radical and delete everything else inside that last level of the caches folder (again, after … you know the score):
> Caches > Adobe InDesign > [version number] > [language] >

if even THAT doesn’t work then … well … you’re on your own. sorry.