InDesign tip : #14 talked about different ways of zooming about an InDesign document. but it missed one really cool little trick which has, apparently, been with us since CS4 — when the navigator panel was dropped — and it’s called, impressively, power zoom.

you start with the hand tool. as always, you do not have to select the hand tool from the tool panel — you activate it temporarily in one of three ways :
• if you have one of the selection tools active — hold down the space bar;
• if the text tool is active but no text frame is selected — use option-space;
• if the text tool is active in a text frame — use option only.
why the developers insisted on making it this complicated is a mystery.

anyway, once you have the hand tool up, click and hold the mouse button. after a couple of seconds the screen will zoom out a little and present you with a red outline (and you can let go of whichever keys you’re holding down). drag the red outline to wherever you want in the document — scroll up or down (or use your arrows) to resize the red outline — let the mouse button go and you’ll zoom into the new outlined area. now THAT’S cool : 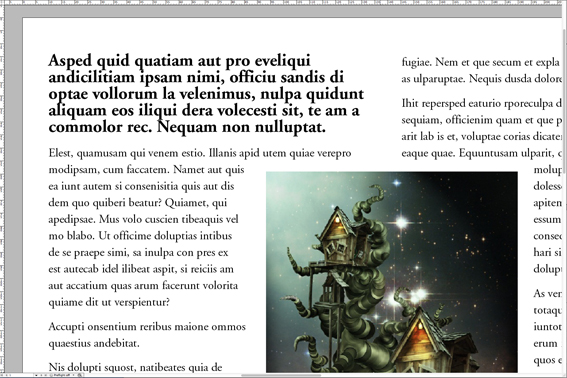 incidentally, if you like that groovy little image by dek wid, you can find a tutorial showing how it’s done over at photoshop tutorials.

lovers of typography love a well designed ligature. those who are indifferent to typography generally say “what’s a ligature?”. and those who are entirely ignorant don’t even notice a ligature even when they are looking straight at one. although, that’s actually the point of the ligature in the first place — you’re not supposed to notice the typographic trick, because the ligature is intended to make reading easier.

just to make clear the foregoing blather — here are some standard ligatures in well-known fonts. you’ll notice that not all fonts have been designed with a full complement of ligatures :

that’s right, ligatures are those little joined-together thingies that are generated by default in InDesign. unfortunately, ligatures do not always lead to improved readability and sometimes you’re better off just using the standard letterforms.

the only way to turn ligatures off for an entire document in one hit is with a script something like this one :

of course, the Adobe CS being what it is, you do NOT turn ligatures off in Illustrator the same way you do in InDesign. for Illustrator you have to go to the opentype panel instead.