the first part of the script references the selected finder items (the files to be changed) and the name of the first of these files. we use text item delimiters to strip the extension from that name :

here’s an example to make things clearer (hopefully). the first dialog is the change from window showing the first filename as it is presented to the user (left). on the right is that same window after the user specifies the part of the filename to change, before hitting ok :

then the next dialog window — change to — pops up with that same user-defined text as the prompt (left). and the user specifies what that text should be changed to before hitting ok again (right) :

you’ll notice in that script snippet above a one second delay between the presentation of the windows. this is purely a psychological gap to help the user realise that a new window has been presented. try it without the delay if you prefer.

next, just for shits and giggles, here’s a surly little message just in case the change from text is the same as the change to text. of course, this is entirely unnecessary — but good for a laugh :

that snippet demonstrates the handy ‘considering case’ control statement. this means the message would only get triggered if you tried to change “ThisFile” to “ThisFile” but not for “THISFILE” or “thisFILE” or “Thisfile” etc.

let’s use the examples from the dialog windows above to explain this part of the script. the files we are changing are pdfs. mgChangeFrom is ‘ThisFile’ and mgChangeTo is ‘ThisFinishedFile’. On the first pass through the loop, mgOriginalName will be the name of the first item in the Finder selection — ‘12345 ThisFile_01.pdf’. We set applescript’s text item delimiters (the characters which separate sections of text) to mgChangeFrom (‘ThisFile’) and then get the text items of mgOriginalName. this will give us the variable mgNameItems as a list — {“12345 “, “_01.pdf”}.

next we do a count of mgNameItems. if the list has only one item, it means mgOriginalName DOES NOT contain mgChangeFrom (eg. the filename ‘54321 ThatFile_31.pdf’ would return the list {“54321 ThatFile_31.pdf”}) and that file will be skipped over because the rest of the functionality is held within that if statement.

incidentally, if mgChangeFrom in our working example was ‘12345’ instead of ‘ThisFile’, the list returned would be {“”, ” ThisFile_01.pdf”} — that is, two list items — so it would pass the requirements of the if statement.

so, if the filename passes that if requirement we then change the text item delimiters to mgChangeTo (‘ThisFinishedFile’) and run the list items back together as a string — that is, {“12345 “, “_01.pdf”} becomes “12345 ThisFinishedFile_01.pdf”.

and finally there’s the line which actually does the name change. then the process is repeated for all the items in mgSelection. and we end with a message which alerts the user to the fact that the process is complete.

to turn this into a functioning app you’d add an on open handler and delete (or comment out) the line “set mgSelection to the selection”. the finished script would look like this :

then you’d save it as an application, drag it to your sidebar, and drag-drop the files you want to rename onto it (left). and quicker than you can say “jiggle my janglers” the work’s done (right). you can see here how files that do not contain the change from text are simply skipped over : 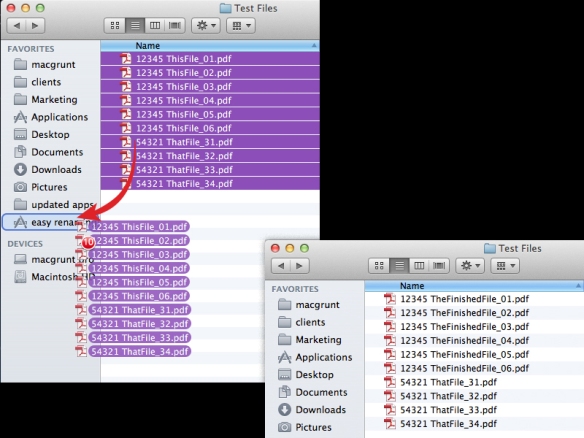 so, this is the basic functioning script. but the next post will look at how to make it just a little more user friendly and robust. we need to add some error handling for different scenarios and maybe some other user safeguards.

’til then, keep grunting.